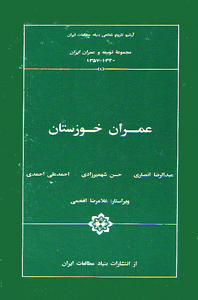 Khuzistan’s development, as reflected in the politics and processes associated with planning, developing, and setting in motion the Khuzistan Water and Power Authority (KWPA) under its first managing director Abdorreza Ansari. The interviews were conducted in Bethesda, Maryland, at the Foundation for Iranian Studies' headquarters. The Khuzistan project launched the series on Iran's economic and social development, 1941-1978.